Brian Bordello - King Of No- Fi 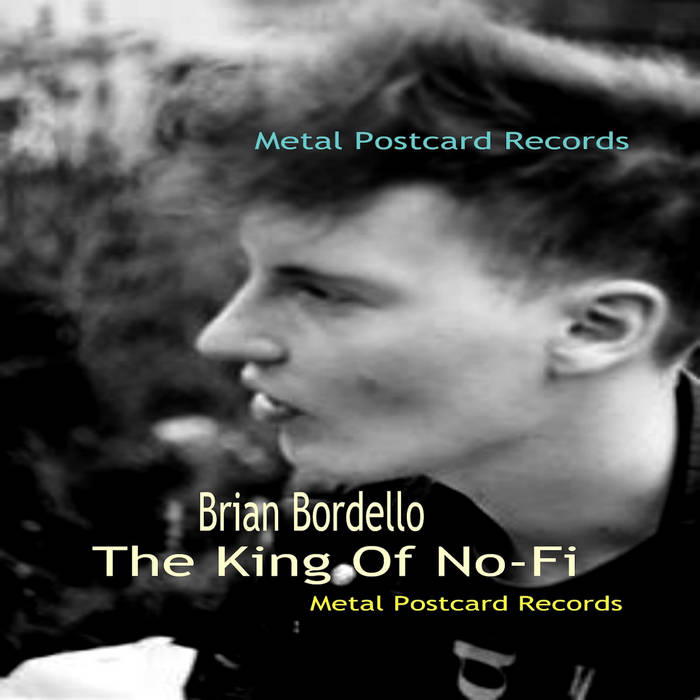 The second album of solo material from Bordello

If there’s any good to have come out of lockdown, and the appalling toll it has taken on live music, it’s that the nature of the modern studio is almost tailor-made for social distancing. I sit at my laptop, you sit at yours, and we’ll just hurl our contributions back and forth through the ether. Expect to see (hear) a lot of lockdown rock in the next few months.

But don’t expect Brian Bordello to approve of much of it. Whether with his regular band, the Bordellos, or not, he may be the king of low-fi, but he’s also the king of curmudgeonly observation as well. And when you slam the two together with as little sonic trickery as possible, the end result is akin to an evening spent listening to your own thoughts on… well, everything… The good ones, the bad ones, the worse ones, and the positively intolerable ones.

Unlike the band, the solo BB is basically a duet for voice and acoustic guitar, with its sights set largely on the nostalgia-driven riptide that seems to dominate modern conversation. Which doesn’t stop him writing a very brief little song about the Velvet Underground (titled, naturally, “The Velvet Underground”), because sometimes, the past really is better than the present.

But time and again, a lyric, a line, an underlying notion, will leap out of the speakers and you wonder just how long Bordello’s been sitting inside your head, mining your most unspeakable thoughts and setting them to music. And then you realize how glad you are that he is.

Part obituary, part mausoleum, part ironic cry of angry regret, this album, which was released to coincide with the recent anniversary of Elvis’s death, offers the same edgy yet grim brilliance that, in years gone by, would’ve been enough to power a music revolution and upend the status quo.

Landing, as it does, in a post lockdown world where cultural heroes are seemingly too concerned with beard oil and gluteal augmentation to bother making meaningful art, Brian Bordello’s new solo project seems particularly apposite.

Like the staying hand, that stops you flogging your Fall albums on eBay so you can afford to have your eyebrows threaded, this collection is replete with a wisdom culled from years of miserable experience.

Marvellously bleak and stitched together from everyday tales of ordinary human crisis, Bordello’s poetic observations are full of phrases turned with acute and disturbing beauty that elevate the mundane in a way that few can achieve.

This is one man and his guitar, recorded on a rudimentary set up that celebrates the aesthetics of tape hiss and the beauty of the direct, but without making it a contrivance. There may be echoes of the old blues recordings of Charley Patton in this sound, but, in truth, Brian Bordello comes from the same North West of England out-there-genius tradition that gave us Mark E Smith.

No doubt, when Brian is dead, the Gaurdian will sing his praises – you don’t have to wait that long.

We don’t take enough care to the words of the softly spoken, instead we find relief, a sense of belonging in those who raise their voice and allow their mouths to often engage before they have had chance to take hold of the appropriate response to the situation they find themselves in.

Even when the softly spoken and whispered grace has been in the past vociferous, angry, punk agitation, truthful barbs designed to provoke a real reaction from the blind and the wantonly silent, we still find ways to treat the creativity and application of sensitivity with disregard; and it much to our shame and embarrassment that we allow this to take place, that the lone piper, the whisperer of truth is ignored.

Fans of Brian Bordello might be used to the power that his music commands, a resonance of the punk poet, the enormity of refusing to be pigeon holed, a voice that is tremendously unique, but also one that will not budge from the musical opinions he holds dearly. However, for The King of No-Fi, the realisation that the punk ethic, one that is more rooted in the attitude than the aesthetics of the look, the no frills experience is one that has garnered positivity, a sound that is viable, needed, essential.

Don’t make the mistake of believing that a whisper cannot change the world, that the Lone Piper cannot make a difference, for in tracks such as God Bless You Jesus, Banana Splits, The Velvet Underground, Scarlet Blue, the excellent Nostalgia Is In The Air and Motherf****r, Brian Bordello takes those pipes and places them against the ear of indifference and blows the mind of those willing to listen to unadulterated sound on offer.

The King of No-Fi is an album that defies the idea of no contrast, it frames a truth that to listen, you must concentrate, not only on the message, but the way it is delivered. Simple perhaps in the minds of those who refuse to truly listen, a powerful statement secure in its honour, songs that whisper into the megaphone and come out the other side daring you to realise you must invest in joining in the fight against the ones who shout as loud, and as empty, as a tin can. Superb!

The self-anointed king of no-fi returns with another songbook of quasi-demoed wistful despondency and self-deprecation; a stripped-back one-track display of rough charms that cuts to the heart of the cult St. Helens malcontent’s sardonic, but also extremely vulnerable, annoyances about modern life.

The idiosyncratic de facto leader of the long standing dysfunctional family legends The Bordellos, and the barely concealed instigator of the anti-Brit pop and plodding rock Idiot Blur Fanboy, Brian ‘Bordello’ Shea (who I must also point out is a regular contributor to these very pages) follows up on his recent solo offerings, the Liverpool Hipster Scene EP and Boris Johnson Massacre single, with another album for the Aussie platform, Metal Postcard Records. Recorded during lockdown whilst growing tired at the lack of revolutionary zeal and wit in contemporary music, and the reliance upon of nostalgia, regurgitation in the industry (both musically and through blogs, publications, radio), Brian has penned a quite sincere collection of romanticized sufferings, regrets and love songs.

Making even Sparklehorse sound like ELO in comparison, the no-fi production values on offer are raw but never really coarse or discordant. No augmentation, filters, effects or sundry, just a bare accompaniment of rough’n’ready but melodious acoustic guitar and the whirling of a rudimental four-track; the click of the record button and, at the end of each performance, the stop button.

Channeling various maverick troubadours, post-punk poets (Dan Treacy springs to mind) and a Brylcreem of rock’n’roll idols (ironically enough the release of this album intentionally falls on the anniversary of the true king, Elvis’ death), Brian postulates on a lack of energy and rage in music, the death of the mutherfucker personalities, a bevy of “scarlet” women and lost innocence. Brian can be a romantic sod at times, even sentimental; writing some real tender poetic lines amongst the scorn and despair, with even a hint of Bacharach on ‘Banana Splits’ (yeah, imagine that!). Various stolen kisses, evocations of less complicated, less divisive magical times permeate the album despite the constant references to the death of this and that and the lamentable resignations and threats to give it all up. Sometimes Brian just tersely pays homage to his icons, such as Lou Reed and Billy Fury.

Quite swooning in places, this is neither a plaintive nor angry songbook, but as I said before a sincere often humorous yearn from a maverick soul stuck in lockdown. The King is dead; long live the King.


There are a lot of things to get excited for, but to make such a list feels more a thing for hipster sites, but one thing is for sure: Brian Bordellos’s latest King Of No-Fi is probably not on it. They do not know what they are missing, or probably are too much into running around like a mental head on killjoy buzzwords that sitting down and listening to the kind calm work of true-isms must be hard for them without being tied up or superglued to a chair… fair enough; this one is for us, super real, genuine, pure, caring, nothing to hide, all masks are off… That’s why we skip the list and just give some well deserved attention to this newly released phenomenon of human ear-candy.

I bow to you, King Brian Bordello and let me tell you; i bow to no-one! Hell, even take my head off and salute with a firm hooray! Long live the kingdom of No-Fi!

YEAH I KNOW IT SUCKS BLOG


I am won over by Mr Bordello's DIY persistence and belief in what he is doing. For the punks this may not be what they want but hey, songs about war, the police, smashing the rules and being punk as fuck all become par for the course and one thing the DIY spiked genre must be is varied.. a very pleasurable CD with more hits and shits, more flips rather than flops.