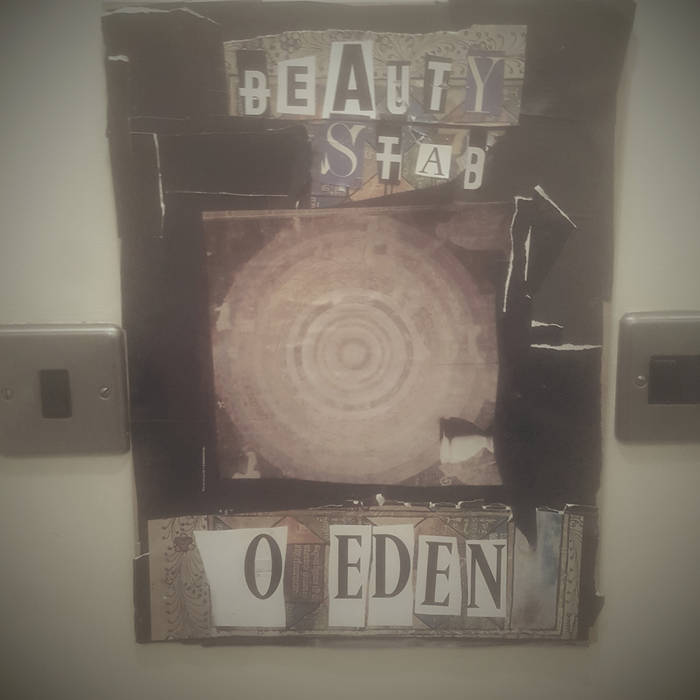 Italo meets Coil .. whatever it is it sounds good to us.

This is not the normal sort of music that you'd read about on IDHAS and that's what makes it so special. O Eden is an EP bustling with ideas that have been thought through. There are so many influences to be heard and yet it's so original. Well done Metal Postcard for bringing this to the world.
I DON'T HEAR A SINGLE


This is loveliest collection of beautiful songs I’ve heard in a long time. I love that there’s variety, I love that Beauty Stab have clearly spent time crafting the songs and how they sound. I’m looking forward to their next release.
LOCAL SOUND FOCUS


Literally just tumbling out of the Metal Postcard imprint, an immense release we briefly mentioned a few weeks back from Beauty Stab a newly formed ensemble featuring the extremely talented Dan Shea of Vukovar and sometimes member of the Bordellos.

The opener ‘O’Eden’ a Scott Walker dark star arrested with the kind of epic glazing that occasioned the grooves of Bunnymen gems back in the days of their gloriously majestic pomp, here swept up as though emerging from the fog of despair to rise and climb phoenix like against the odds, showering all in a tear trailing radiance of jubilance and hope, crushing and devastating in one fell swoop.

Sore thumb time with a Fall styled ominous appreciably curdling the grooves of ‘clothes’ as it rummages with a clockworking austere funk gouged edginess nibbling around the more shadowy environs of Bowie’s ‘Scary Monsters’ (in so much as its dislocating Fripp-esque wiriness) all the time blessed with a pathological and predatory prowling that snakes with a dead eyed dark clubland sleaziness.

Maybe I’m softening with age but getting our vote as the sets best moment, the overwhelming tug of the parting ‘need you around’. With its bliss blushing hazily glazed shoe gazey dream away tailoring not to mention its lilting and languid airbrushing, there’s something of a faraway reflective airlessness suggesting a Mercury Rev meets Pale Saints alchemy attaching here with the honeyed seasoning of Jesus and Mary Chain echoing in its mellowing fog.


The melodrama the heart and bedsit seediness that has not been heard in pop since the golden days of Soft Cell.

Beauty Stab are Dan Shea and Buddy Preston, two former members of the, highly tipped at one time, Goth rock industrial folk band Vukovar, who left to share their love of post punk, disco and 60s/70s/80s pop to the world. Their current three track EP has been one of this year’s musical highlights a stunning release bringing back the much missed and much needed glamour, heartbreak and bedsit seediness to the pop world.


Why did you leave Vukovar?

Buddy: For the love of music and art, we needed a change of scenery. For a while, I fell out of love with producing music and was finding myself feeling so emotionally detached from it. Upon leaving Vukovar, I initially didn't want to do music anymore and concentrated instead on other artistic ventures for a while. But music is where the heart is.

Dan: I've no desire to dwell on that or air dirty laundry. All that needs to be said is that I did.

What made you form Beauty Stab?

B: The need to carry on pursuing making art and music with a close friend. I know that anything Dan writes is genius and I hope he thinks that my contributions do them some justice. Whilst in Vukovar, I wanted to record Dan's rejected songs because I always saw something in them in a way I knew I could make them work.

D: The current landscape musically is devoid of sex and danger. Our society is moving backwards at a frightening rate. Even though we are at present operating on a very small scale, I really want to one day be to some confused queer kid living in the middle of nowhere what Marc Almond or David Bowie was in years past (or John Balance from Coil was to me). I am queer in both senses - I am gay but more crucially I am fucking Weird. Our homos should not be homogenised. We are not milk, although Harvey was. Queer is not just about sexuality - I've been lucky enough to know straight people with very queer sensibilities and cursed enough to know gay people who are cripplingly pedestrian. There are others doing this at the moment - SOPHIE would be one that'd spring to mind, she made my favourite singles of 2018 (It's ‘Okay to Cry’ which is a beautiful song and ‘Ponyboy’ which is just sheer filth).

But no one is doing it in the field we operate in. It's full of hopelessly glamour-less people with beards who make the right noises and have the right political opinions but they're making sexless facsimiles of records made by people who, shock horror, listened to stuff by people who didn't look and sound exactly like them. Or maybe they are but I'm not meeting them. If you're out there please get in touch with me through the obligatory Beauty Stab social media because lord knows I need a friend. If you're not already doing it, put some makeup on however badly, wear some nice patterns and poke at a synth ineptly and I would love to share a bill with you. I'm into the idea that left-wing politics doesn't have to be austere and devoid of joy. Bronski Beat strike a chord with me far more than some dullard with an acoustic guitar telling me what I already know in a way I don't want to hear.

I know it's also an ABC reference but Beauty Stab is a powerful combination of words. A shard of luxury you don't actually have to be able to afford because we're there, you're here, it's now and this is the only time we have. In my current crop headed state, Buddy's the Beauty and I'm the Stab. Bad news from a pretty mouth.

What are your influences?

B: Life experiences, tales of old, people we appreciate. Musically, whatever we're listening to at that moment. We're creating mixtape style playlists for various streaming media to let people know what we love right now, and maybe we can enlighten some people.

Different movements really. Musically, all the people listed in England's Hidden Reverse with Coil being the best. We like lots of Italo disco and Chicago house and Soft Cell, Depeche Mode, Prince, etc. Those people were emulating. We're also massive, massive fans of Rowland S Howard and pretty much anything he touched. Then there's all the obvious Bowie, Iggy, Roxy, Lou Reed. Then there's girl group records and by default anyone who has the sense to plagiarise them.

Then we're also influenced by how shit everything is, and also the ethos that riot grrrl bands and people like Crass had even if the artwork and the ideas are invariably more interesting than the music which is a bit sonically conservative and paint by numbers.

You worked with many established artists with Vukovar, have you any plans to collaborate with any with Beauty Stab? Or are going to rely on your own talent?

B: We've played with some people that have really inspired us as artists; so to call those friends now is incredible. I wouldn't want to rely on those with an already established fan base, we wouldn't say no to the right people, of course.

D: That's a bit of a pointed question isn't it? We'll see what happens. There are people I'd love to work with but whether it was as Beauty Stab or part of their project or something else entirely is another consideration. We've both got a very definite vision and aesthetic for what we're doing and that may morph over time but anyone who we did work with would have to fulfil two criteria.


This ship has no passengers. I only want to work with people who have ideas of their own and can contribute to the creative process: not a glorified plug in we're scripting or trading on the value of the name of. An example of someone I'd love to work with would be Karl Blake. I keep asking him. He's not released a record in decades. Mick Harvey plays on about half of my record collection but that's never going to happen. We're obviously going to collaborate with the Mekano Set because they're our friends.


Are you going to stay as a two-piece or have you any plans to expand the line up?

B: We plan on having quite an interchangeable line up depending on what type of gigs we're attending. For now, we're using all sorts of machines, synths and tapes to help us get the live sound we want. But in the future, we would love to play our songs with a full band.


Any gigs planned? Plans for the near future?

D: Our live setup is mostly composed of broken equipment, also utilising drums and sequenced bass tracks played off a tape recorder a la OMD. As such there are no dates to announce - we are in talks with several different venues and I'm looking forward to making everyone of any gender in the audience pregnant solely through the means of my voice and dancing. If that doesn't work Buddy is categorically the best looking man in the world so there's always that. I can only imagine that even blind and deaf people could develop a crush on him.