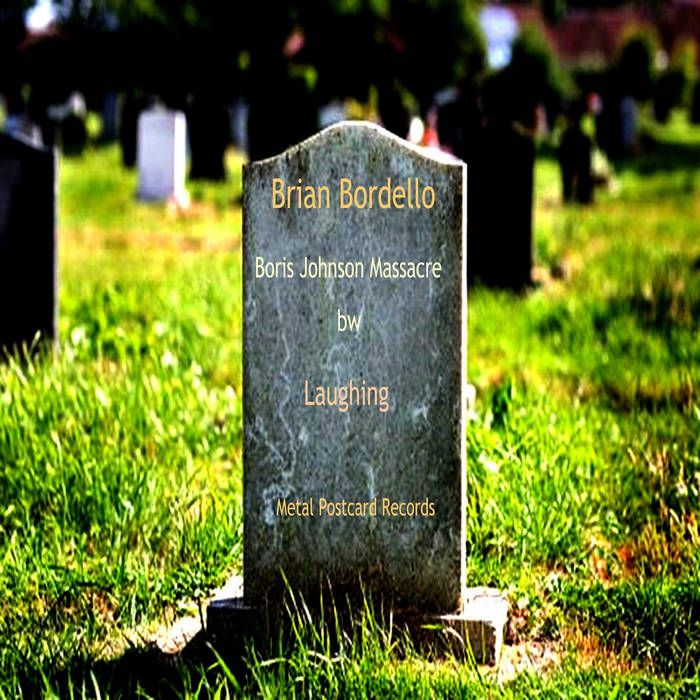 Gavin Hellyer Good old Brian. Great track created by Bozo The Clown No.2. You know who Bozo The Clown No.1 is. Mind you, if people actually thought when they voted, then things might be different. And the same goes for you Americans. And if you don't vote, then make sure you do. It's compulsory in Australia, but not in too many other countries. Favorite track: Boris Johnson Massacre.

I think it's not in doubt what the song is about !


Brian Bordello’s been making music for decades, both with his band ‘The Bordellos’ and more recently as a solo artist. Highly prolific, fiercely indie, uncompromising and lo-fi to the nth degree, his often comic cynicism is tempered with a real passion for new music.

Like most musical outsiders, writing songs is an urge he can’t switch off so his output is a steady drip against the establishment and often given away for free, like this new offering. It’s a gentle attack on the incumbent Prime Minister – “If you voted Tory, you may as well have voted for Kenneth Williams reading Jackanory”.

Satire has reached a point, where for some, the idea is a caricature of its own self, where you cannot lampoon an individual of certain standing because it demeans the message they are trying to get across, the miles and years they have put into cultivating an image which is pristine and supposedly captures the best of us, that somehow suggests we have to fawn and tip our hat to them whenever they speak, pass judgement, make a noise but which in reality the public could use as a weapon, not one to maim but to prick the over inflated opinion and the pomposity of those that seek to rule.

We live in uncertain times where even the most despicable can seemingly get away with ineptitude, with finding ways to distort the national arena in their favour, however, some remain vigilant, a punk ethic in a world willing to be lampooned, the satire delivered with justice and quite often the only voice not distorted.

It is to Brian Bordello that satire has received a helping hand, the representation of a Prime Minister is never above the art of satire and in his new single, The Boris Johnson Massacre, and with the embracement of the low-fi sound that the artist has been diligently working with over the course of time, has captured the mood, not only of the people he is meant to serve but the anachronism to which we are instructed to show deference to those who enjoy the privilege and luxury to which no one should ever abuse or take for granted.

The single is a timely call out, the manipulation of high office in times of crisis and drama, and what finer way to capture the essence of such anger, than to hear the heart of the music conducted that it comes out of one speaker, a reminder of the old megaphone to which Speaker’s Corner became more than just a starting point and rallying call for the dissatisfied, it took on resonance and extra meaning, it meant you had to truly listen to the message rather than be swamped by it.

Brian Bordello once more frames the point perfectly, such ineptitude, no matter the party, should be allowed the room to do anything but squeal, and in The Boris Johnson Massacre the squeal is overwhelming.


Probably the only good thing that had come out of the whole Boris Johnson ordeal: this song & music – so let’s hope it spreads out like a virus so everyone will hear and love it.

It’s out on Metal Postcard Records and feels (for a protest release) all nice and fuzzy. It’s a 2 track-single that exposes clearly a loving passionate realness in which it’s easy to know who to trust and fall in love with. Brian Bordello slams his guitar and sings from his good heartened soul and realness brave heart over here, which is an immediate stark contrast to the sound of cold psychopathic rulers that only seem to care for money, control and acting imbecilic.

YEAH I KNOW IT SUCKS BLOG


Boris Johnson Massacre' has a light skip in the strum despite the utterly factual content of the song. The mop-headed comedian voted into power by people not-thinking has made a mess, another contributor in a long line of donators to the crap-heap of life. The sweet serenade has a somewhat beaten acceptance of a situation best deemed as farcical and ultimately hopeless. The lilt is soft, lightly applied with the vocal style 'as-a-matter-of-fact'. It stinks to buggery of The Bordellos accents and that is no bad thing. There are no frills here, no heart-stopping thrills but just a sobered observational flat-line that, duly does what it sets out to do and, in the process, appeals to my earthy desires and political disgust. The Tory Jackanory Story - tis a comedy still unfolding and destined to inspire the disgruntled to keep on creating.

'Laughing' is the better song of the brace with a slow repetition coming to a tepid simmer that remains easy, caressing and highly considered. The question asked is delivered with a soporific slant, we are on the cusp of slumbering sonica where eyes are lidded and we are left at the final silence to drift off and ponder. Some music is made to provoke physical activity, some is cultivated to promote cerebral consideration - this song is an example of the latter and is a nice counterbalance to the flip-side product. I play this ditty over and over and am absorbed - it is a great contrast to the rowdier tunes I get bombarded with.