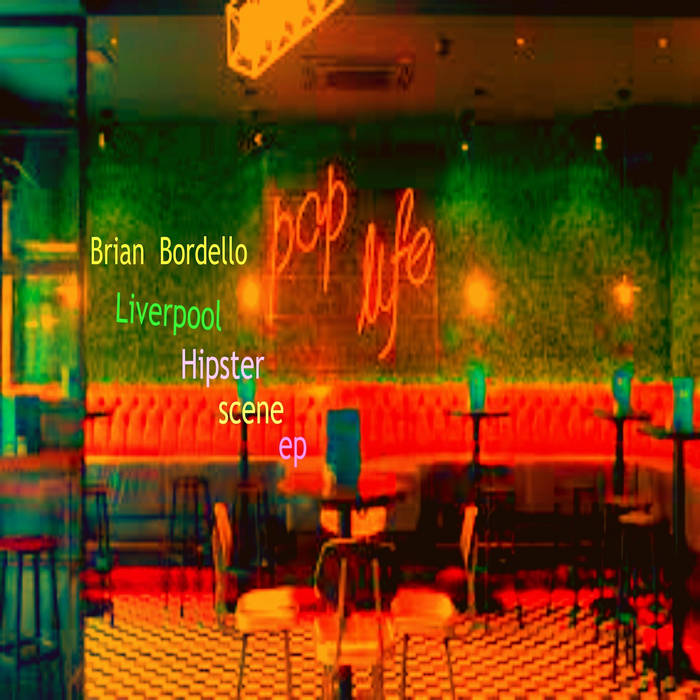 The third solo outing from Brian Shea of the Bordellos

Early Pavement or Primus meets pop Beatles in accoustic with tape hiss and all.

The Bordellos have forged a path as independent in sound as the Fall, Half Man Half Biscuit, Ivor Cutler & the Monks

Only 29 minutes away from central Liverpool according to google but listen to these songs and you'll hear from a world a million miles away from metropolitan millennial media imagination.


Brian Bordello doesn’t need to be told what is cool, he maintains the temperature of his work at a point where it feels wildly fortunate to be able to hear it being played, to be invited to see his city through the eyes of one who has lived every battle and fought against every whim and latest thing.

It is to his latest E.P., Liverpool Hipster Scene, that this man of observation once more brings his watchful eye over the music he creates, only this time he makes sure that the result is one caught up in the relentless pursuit of purity, no weight of excess, just the decency of performing the low-fi sound and relishing in the consequence of transparency to which a guitar, vocal and a mic become king of the studio and set the scene on fire.

Across the songs The Girl Next Door, The Bloom Of The Wild, The Poetry From The Dead, Tragic Magic Tragic, as well as Liverpool Hipster Set, purity isn’t just part of the overall charm, it is a statement to the world that not everything in life needs to be polished out of recognition, that a statement can be, and must be first and foremost an occasion of truth.
LIVERPOOL SOUND & VISION


In a hipster proof stereo, Brian Bordello sings and plays in one side, while the other ear gets bLiverpool Sound and Visioneautifully treated with a empty hiss. It will deliver a similar bliss that listening to the dusty sound that hip people love to praise their vinyl re-issues for. It’s perfect for the popular no-fi crowds that are now roaming the east end in search for pants with pre-made holes in it, probably keeping their ears open for authentic songs that can’t be found in the boxes of the left over lonely record shops out there or dodgy underground radio stations that they have trouble not shutting up about.
YEAH I KNOW IT SUCKS


REVIEWS FOR THE BORDELLOS

The Bordellos aren’t your average band, in many ways they are anti-music with a distinct punk attitude, but a punk attitude that is knitted together with an interest in classic pop and music.

The Bordellos are making some of the best pop music I've heard, it's just they're doing it in such a wilfully obscure way you'll never hear it.

In terms of 90% of what you’ve been listening to this month, however, it is as dissonant, dissolute, disreputable and demented as any disc you could ever hope to hear.

Yeah I Know It Sucks

The Bordellos’ own pariah status sees them locked-out of the music industry for no reason – as they see it – other than the mediocre tastes of those who run it: As the chief Bordello puts it, they’re concerned with the “death of magic in mainstream pop” and its lackluster weariness to controversy and anything different.